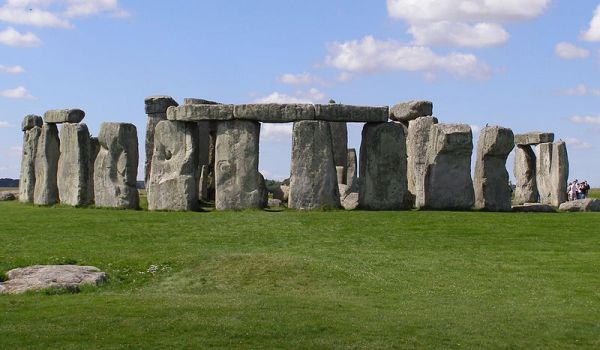 Stonehenge is a prehistoric monument located in Wiltshire, 8 miles (13 km) north of Salisbury. One of the most famous sites in the world, Stonehenge is the remains of a ring of standing stones set within earthworks. Archaeologists believe it was built anywhere from 3000 BC to 2000 BC. Radiocarbon dating done in 2008 suggested that the first stones were erected between 2400 and 2200 BC.

Stonehenge evolved in several construction phases spanning at least 1,500 years. There is evidence of large-scale construction on and around the monument that perhaps extends the landscape’s time frame to 6,500 years.

Scientists have just unveiled the results of a four-year survey of the landscape around Stonehenge. Using non-invasive techniques like ground-penetrating radar, the researchers detected signs of at least 17 previously unknown Neolithic shrines in the vicinity. Scholars still aren’t sure why Stonehenge was built, as the monument’s Neolithic creators left behind no written records. But the ruins, which align with the sun during the solstices, stand as an impressive feat of prehistoric engineering. The biggest stones at the site, known as sarsens, are up to 30 feet tall and weigh 25 tons; they are believed to have been dragged from Marlborough Downs, 20 miles to the north.

Stonehenge is approximately a 1 hour drive south from Dorwyn Manor.